BigQuery supports user-defined functions written in JavaScript and by using WebAssembly it is even possible to run C code. While having support for C is quite neat a more widely used language when it comes to data analysis and processing is Python with its scientific library ecosystem making the lives of data scientists much easier. So, wouldn’t it be cool to bring Python into BigQuery? That was the motivation behind my internship project at Mozilla.

Starting out with this project, the initial idea was to use Pyodide which is the Python stack compiled to WebAssembly including various scientific libraries, such as NumPy and Pandas. Pyodide runs in the web browser and is used as part of Iodide, a tool to write interactive documents using web technologies. However, after some testing and playing around it became clear that BigQuery has various limitations related to UDFs that make using Pyodide impossible:

While some of these limitations are documented, others had to be determined empirically. The Pyodide WebAssembly and JavaScript files without any libraries are already more than 12 MB of size and would be too large, even if they could be split up into separate smaller files.

After spending some time looking into alternatives to run Python in WebAssembly or transforming Python code to JavaScript, I came across MicroPython. MicroPython is optimized to run on embedded systems and even offers a port to JavaScript using Emscripten. MicroPython, however, has some limitations such as no Python Standard Library and no support for importing packages that have not been adapted for MicroPython. It is less powerful than the standard Python but also a lot smaller and less memory hungry.

MicroPython did not run out of the box in BigQuery. I had to make some changes to the MicroPython code since it used async to initialize WebAssembly, accessed DOM elements which are not available in BigQuery and tried to load external libraries which I instead embedded into the code. WebAssembly can be initialized without async by doing the following:

The following code shows what a UDF that uses Micropython could look like:

The three files part0.js, part1.js and micropython.js need to be imported and therefore need to be stored on Google Cloud storage. In the JavaScript UDF, first MicroPython needs to be initialized by calling mp_js_init with the given stack size in bytes. Then Python code can be stored into a string and passed into mp_js_exec_str which runs the Python and returns the value of the last return statement as string.

The query can also be copied into the BigQuery Web console and executed there: 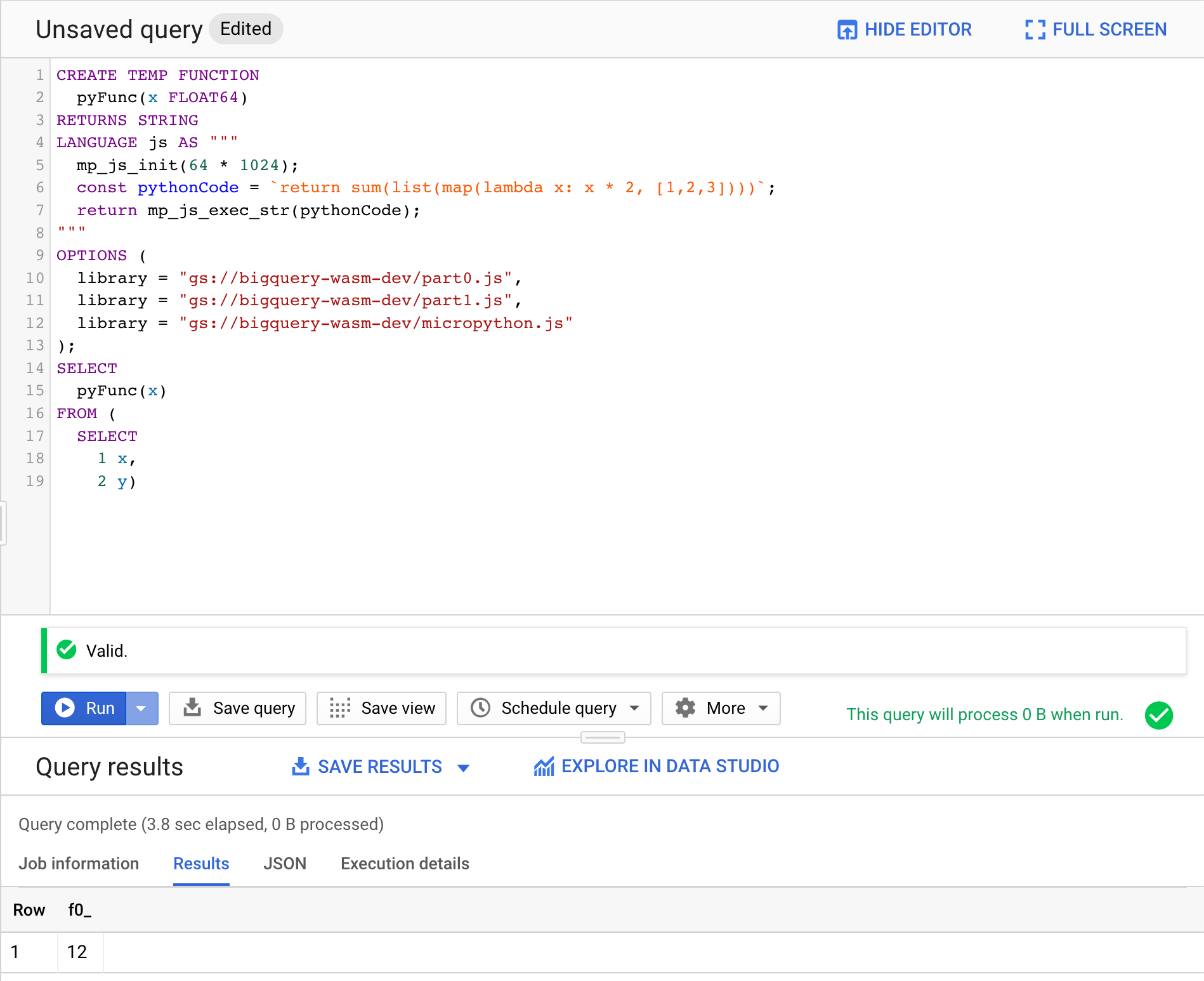 I created a GitHub repository with scripts to automatically generate and deploy UDFs containing Python code to BigQuery.